Is There a Difference Between Coconut Cream and Coconut Milk?

Walking down a grocery store, there’s a chance you will be amazed to see a lot of coconut products: coconut milk, milk, coconut cream, coconut creamer, etc… Just like other fruits found in nature, coconuts offer versatility as well. They can be processed in many ways in order to make various products. Once you see all those coconut products, you should know that they’re probably all the same, except for the ratio between water and fat. Many people wonder what distinguishes coconut milk from coconut water, and is coconut cream the same as coconut milk? You may think they’re the same, but there are notable differences.

Coconut is one of those tropical delights we see featured in menus and in recipes more and more, particularly with the increasing popularity of Asian and Indian cuisine. The term coconut can refer to the fruit, the seed, and the entire tree. It consists of three layers, with the “meat” and liquid being used for making a plethora of different foods and beverage products, some of them being coconut cream, coconut milk, and coconut water. Once you get acquainted with each of those coconut products, how they’re made, and their culinary applications, you can choose the right product for yourself.

Here are some of the goods that can be created form the marvelous fruit, the coconut:

Coconut milk is a liquid cream combination of coconut fruit and water. It’s a notable element in oriental cuisine, typically used when making curry dishes. Because of its density, it can be used as an addition to soups, smoothies, and shakes.

Coconut milk can replace a coffee creamer, plus it’s dairy-free. Try using it as a foundation for a refreshing ice cream. To emphasize the flavor, try adding some almond butter, cacao powder, or berries.

Now let’s take a look at coconut cream. It is a lot denser compared to coconut milk because it is mixed with less water. This makes it a perfect milk substitute in various recipes instead of coconut milk, or when making meals that require heavy cream.

In case you have some coconut milk and no cream, no need to worry, all you have to do is put the milk in the freezer and let it stay overnight. Place it in any dish you find, put it in the icebox, take it out the next day, and it’s ready.

DOES THE TASTE OF COCONUT MILK RESEMBLE COCONUT?

There is no strong flavor like you have with coconuts, but it provides a subtle creamy nut flavor just enough to make it an interesting alternative to regular milk. A lot of people have digestive problems when it comes to cow’s milk, so coconut milk is a delicious substitute.

THE DIFFERENCE BETWEEN COCONUT MILK AND COCONUT WATER

In the center of a green, young coconut, you’ll find a clear liquid that is coconut water. It has a mildly sweet taste, full of nutrients, and less calories than canned coconut milk. Before it became an inseparable part of wellness nutrition in the United States, for many centuries, people across the tropics enjoyed this tasty drink.

There is more potassium in one glass of coconut water than in a whole banana, which makes it a popular choice among athletes. There are even documented cases of physicians utilizing coconut water in the tropics to hold their patients hydrated instead of saline in IV bags.

Coconut milk is made from coconut’s white meat. The flesh is minced and soaked in hot water. The mixture is strained to separate the white, opaque milk after the coconut’s flavors disperse into the water. Using a small amount of water in the recipe produces coconut cream: a thick, whipped cream-like substance that is skimmed from the top of the boiling liquid. Canned coconut milk is a mix between coconut milk and coconut cream. It can mimic both variants in recipes. 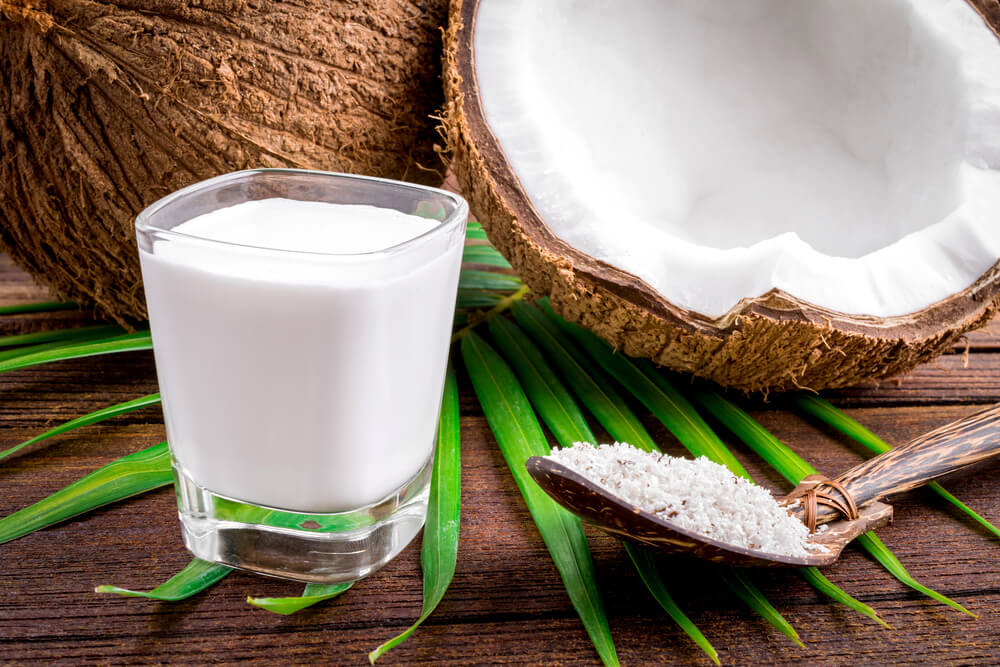 WHAT IS THE AMOUNT OF WATER YOU HAVE TO ADD TO COCONUT CREAM TO TURN IT INTO COCONUT MILK?

If you’re thinking about using coconut milk in your cooking endeavors, be careful which one you choose. If you just wish to drink coconut milk (or add it to your favorite drinks), then go for boxed coconut milk. However, if you plan to use it for cooking, be sure to choose the canned variety.

Now that you know the difference between coconut cream vs. coconut milk, feel free to read some of our other blogs on similar topics. We are a beverage and food delivery company based in Texas. We are committed to providing fresh food and drinks to your home or office. Need more? We also offer condiments, cleaning products, supplies, and specialty products for cleaning. Contact us today for any information you need.